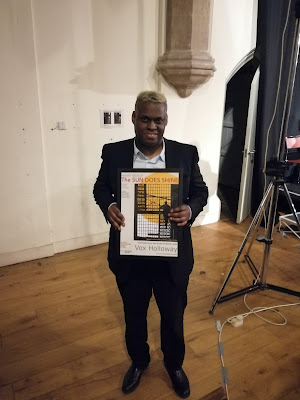 Returning pleasures have characterised the slow emergence from lockdown.  Music – silent in concert halls and classrooms throughout the country, must be one of the essential pleasures to reignite our sense of humanity.  What more expressive of human failings, resolution and redemption can there be than Harvey Brough and Justin Butcher’s new work, The Sun Does Shine?  Reading the true story of Anthony Ray Hinton’s wrongful incarceration at the flawed behest of the Alabama system of justice, is like being trapped in the worst pages of a dystopian novel – Darkness at Noon or 1984.  There is a Dickensian aspect to some of the attendant lawyers charged with facilitating Hinton’s determined challenges to his conviction – we might think of Bleak House: ‘The one great principle of the English law is to make business for itself’.  There is a pall of death surrounding the entire decades-long process of legal procedure – Hinton is on Death Row in solitary confinement and 54 fellow inmates are led to the electric chair or the lethal injection gurney during his time there.  There is a smell of burning flesh from ‘Yellow Mama’ – Alabama State’s chair – as another prisoner meets a terminating justice.   The books of Koestler, Orwell and Dickens can be closed, albeit that their scenarios remain indelible – yet the prison environment, the loneliness, the despair, cannot be snapped shut and placed on a bedside table.  The ultimate vindication of Hinton’s innocence – his original conviction was overturned in 2014 – might hide away the despair of a lost life, yet it becomes apparent that the years in jail were not entirely lost.  Despite moments of utter desolation, Hinton finds sufficient strength to manage his appeals, and he finds solace in reading.  In starting a prison book club, Hinton, spreads the words among his fellow prisoners.  The club, needless to say, has a steadily diminishing membership.

The way Brough and Butcher weave all these elements into a seamless whole is masterly; the work is part-opera, part-musical, part-play.  Aside from the principle roles, there is a chorus that acts both as a commentarial and as a pool from which to pick step-out roles.  A small band of musicians forms the close-knit orchestra.  Brough choses a style allied to popular and faith-inspired music of the Deep South: blues, spirituals, soul, and funk elements abound; some songs are newly arranged classics, many are Brough originals.  These songs form the emotive core as in the traditional ‘number opera’ – yet the action moves freely through the songs as a way to keep the web of feelings constantly in touch with the bitter realities of the story.  What gives the first act tremendous power is not just the dire aspects of the case, but also how the action is situated internally in the play of intense relationships between Hinton, his mother, and his friend Lester Bailey.  His mother’s faith becomes a bedrock to which Hinton clings; Lester’s loyalty – he visits Hinton every month for 28 years – is another vital support.

In the second act, where the baffling legal labyrinth in which Hinton finds himself is revealed, the action takes on the claustrophobic worlds of both Kafka and Harold Pinter – process as non-process, dialogues with unseen voices.  We are taken through the zigzagging pathways of petition applications, judicial reviews, and appeals.  This agonisingly slow legal crawl underscores the strange arena of tentative relationships between Hinton and his fellow inhabitants of Death Row – most notably that between him and Ku Klux Klan member Henry Hays.  In an eerie miracle of the human spirit, prison becomes the one place where Hinton and Hays can interact, without bars, so to speak.  After the U.S. Supreme Court’s ruling to overturn his 1986 conviction, it is only a matter of time before Anthony Ray Hinton can walk free.  He does so on April 3rd 2015, the event portrayed in the final tableau of Brough’s work, entitled The Alabama Sky – an overwhelming listening experience – the entire company combining in a celebration of freedom against almost implacable odds.  The cogs of justice ground and ground, but eventually found a gear that fitted the facts and not mere expedience.

Harvey Brough led his work most ably from the podium.  Vox Holloway – a community choir based in North London – were the Greek chorus, and in the finale, the co-celebrants of Hinton’s release.  The step-out roles were most tellingly done.  The choir’s commitment to such a challenging score was superb – they brought energy and passion to the music.  The small band played with all the familiarity of the styles needed for Brough’s compendium of Alabama sounds – and they sounded much bigger than a quintet, being able to deploy any number of effects and sonorities.  The cast was splendid – I was moved by Christina Gill’s portrayal of Mama, and Michael Henry was most sympathetic as Hinton’s devoted friend, Lester.  Dale Ripley managed to project his voice into a prison void as the condemned murderer Henry Hays – his unlikely friendship with Hinton provided a chilling reminder of the murderous falsities that keep people apart.  Okezie Morro and Clara Sanabras sang most finely the roles of Bryan Stevenson and Santha Sonenberg, two lawyers who determined that Hinton’s appeals would not, in the end, be allowed to fail.

Central to the work is the role of Anthony Ray Hinton himself.  Wills Morgan – singing and acting almost without pause during nearly two hours of highly-wrought and fraught drama was simply extraordinary.  He combined the vocal abilities of an operatic lyric tenor with a gospel shouter – by way of Luther Vandross.  His immersion in the emotional whirlpool of Hinton’s incarceration was uncanny – ‘method singing’ if you will – what Marlon Brando might have done had he possessed a voice.  Morgan, known, among other things, for Coming Through Slaughter, Mike Westbrook’s opera based on Michael Ondaatje’s novel of the same name, Jerry Springer: The Opera by Richard Thomas and Stewart Lee, and as an advocate for the music of Ronald Stevenson, has gathered all his experience as both singer and actor to energise his performance.  He never let go of the drama from start to finish and propelled the work to its heartfelt climax.  It was an epic role triumphantly achieved.

At the end of the show the audience rose as one.  This was a one-off performance – all the efforts of the dedicated team were channelled into this one showing of the work.  It ought to be staged – one can imagine the tremendous opportunities for realising the alternatively confined and vast spaces of the prison, the scenes of despair and triumph echoed by lighting – the dead dark of oppressive walls and the liberating blue of the Alabama sky.  The West End ought to be in touch.

An aspect of despair is that which can suffer no expression – the only sounds are the calls of a raised voice numb with pain echoing in empty vaults.  The institutions are dumb in the face of their own failure.  Except that Anthony Ray Hinton made them speak a truth they sought to deny.  Harvey Brough and his wonderful cast of performers have added to that vital telling. 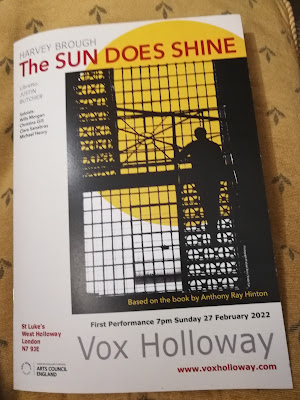